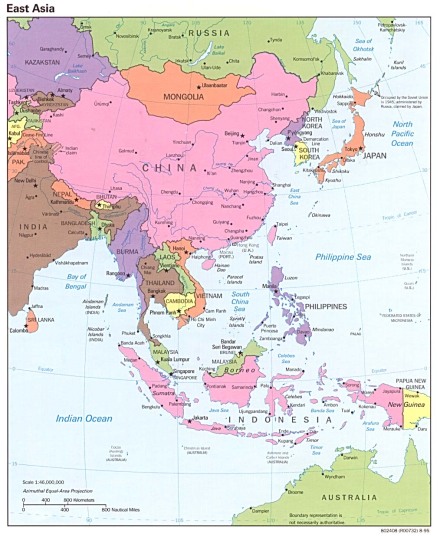 The strategic arena of East Asia.

SINCE THE END OF THE COLD WAR, American naval supremacy has been unchallenged throughout the world. Even during that massive, global struggle, the Soviet Navy never came close to rivaling the power projection capabilities of the United States (of course, this was never their intent).

With the dawning of the twenty-first century, however, many commentators are declaring it to be “China’s Century,” during which the People’s Republic will finally assume its rightful place as a counterweight to the United States. Despite the financial crisis currently engulfing the world, the U.S.-China trade deficit reached record levels in 2008, with $266 billion against the United States. If the economic sphere were a battlefield, China would surely be winning.

Yet, the crucial trade arena formed by the South China Sea, East China Sea, Yellow Sea, and Western Pacific Rim has gone largely ignored in China as an area of vital strategic importance. Half of the largest container lines in the world are owned and based in Asia, and one-third of the world’s shipping is owned by Asian nations.[1]

It would make sense, then, for China to possess and deploy a strong navy. Since the Communist victory over the Kuomintang (KMT) in 1949, maritime power has been neglected, but the last decade has seen an ascendant navalist faction in the upper echelons of the Politburo. China has now embarked upon a major program of modernizing the People’s Liberation Army Navy (PLAN), and while American superiority in the region is likely to remain for the near future, the rise of the PLAN will pose significant challenges to the United States Navy in decades to come.

While recent history would indicate otherwise, China has a long and storied naval heritage.

END_OF_DOCUMENT_TOKEN_TO_BE_REPLACED

BEIJING – A stronger Chinese navy will not seek to build military bases overseas, a retired senior officer has said amid media reports that the country harbors such “ambitions”.

Zhang Deshun, who was till recently the deputy chief of staff of the PLA navy, said a naval force with advanced armaments and enhanced capabilities will contribute more to UN-led anti-terrorism, anti-piracy and disaster-relief missions.

A larger navy with a greater reach does not mean it will seek to play the role of “world police”, said the retired rear admiral, who is a deputy to the ongoing session of the National People’s Congress.

I don’t know how to read this. I see several possibilities, not all of which ascribe ulterior motives to the Chinese. But most of them do. The first would be that they’re serious about this, and genuinely believe that if not now, then in the very near future Chinese naval capabilities will be such that they don’t require any overseas support facilities.

If that is true, their public admission of this could serve a twofold purpose: downplay concerns of a Chinese global power play, and at the same time serve notice to the United States and other maritime powers that China is advanced to this degree. After all, the U.S. operates a network of naval facilities around the world – perhaps Beijing is so powerful it doesn’t have to?

Alternatively, China could be using this to distract from the ‘three island chain’ plan. 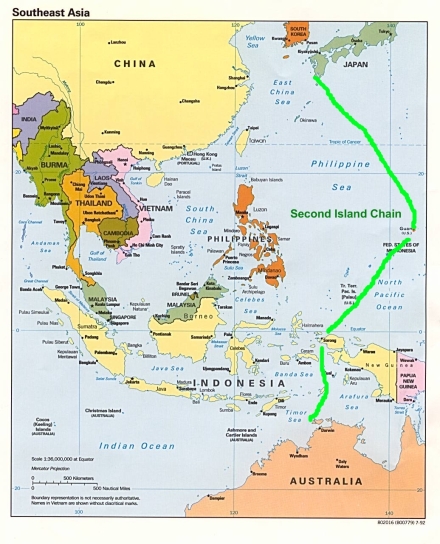 By eliminating the ‘third island chain’ – global, blue-water power projection – China’s ambitions of regional hegemony seem much more restrained and reasonable in comparison. But keep in mind that even the ‘second island chain’ in the strategy is demarcated by a line running from southern Japan to Guam through the middle of Indonesia and terminating at Australia. It’s still quite a bit of space.

Am I just being paranoid?

The Shanghai Cooperation Organization (SCO) may soon expand to include Pakistan, and more importantly Iran. Iran is already an observer nation, but full-fledged membership would definitely have a big impact on the region, as well as any future role for the SCO. Larison disagrees:

Granting Iran membership would be seen in the West as a provocative move, but a good question is why anyone should be provoked by it. The SCO is not a full-fledged military alliance or defensive pact, and it has existed primarly as a mechanism to consolidate Russian and Chinese political and economic influence in Central Asia. At the moment, it is a limited security and economic structure.

This is all true – the SCO isn’t even on par with the CIS or other limited regional IGOs. But seeing as one of the main purposes of the organization is to provide China and Russia a multilateral forum for pressuring much of Central Asia, this only increases their ability to do so. I think the way to look at this isn’t so much as Iran gaining influence and legitimacy, but rather another big country on the periphery of Central Asia able to provide additional leverage for Russia and China. A shrinking of Central Asian security.

But the most interesting wrinkle might be that for Iran it can’t be about oil, unless they know something about their reserves we don’t. Larison’s observation that it’s Russia pushing for Iranian membership with the Chinese more reluctant points to some interesting energy politics. Could Russia be looking at Iran as their Kazakhstan?

In the wake of Google’s announcement that they would cease collaborating with the PRC:

China heavily censored the news that Google would stop cooperating with Chinese Internet censorship and consider shutting down its operations in the country.

It’s hard to see how that doesn’t prove a point.

There’s a new article making the usual rounds, from the Q1 2010 issue of Orbis. James Kraska’s “How the United States Lost the Naval War of 2015” [abstract only] is definitely an interesting read; it’s one of those future/alternate histories examining, essentially, how we might get there.

Kraska hypothesizes a Chinese missile attack on the USS George Washington while “conducting routine patrols” off of China’s coast. China immediately denies all responsibility and in fact aids in the rescue of several hundred sailors, out of the original complement of 4,000. In addition to the international perception of China as uninvolved (much less the aggressor), the United States is blamed for the ecological disaster caused by the George Washington‘s nuclear propulsion system.

China’s ability to conduct such an operation is chalked up to a combination of naval spending cuts, the reassignment of “an entire generation” of officers to COIN and conventional desert warfare in the Middle East and central Asia, and “the environmentalists in charge of strategic U.S. oceans policy.”

‘Ridiculous’ is certainly the first word that comes to mind, and commentators like Thomas Ricks certainly don’t disagree, but there’s a small point to extract from Kraska’s article. His assumption that the increasing budget and growing naval aviation programs of the PLAN will directly challenge the USN for control of East Asia is a little much. He’s right on the nose, however, with the specter of asymmetrical naval warfare.

Robert Kaplan wrote an article for the Atlantic Monthly a few years back, “How We Would Fight China.” It covers a lot of this in great detail. The psychological impact of asymmetry at sea is particularly telling – Kaplan notes that “the effect of a single Chinese cruise missile hitting a U.S. carrier…would be politically and psychologically catastrophic, akin to al-Qaeda’s attacks on the twin towers.” It’s hard to talk about China without getting melodramatic, apparently.

Perhaps the greatest lesson to take away from all this would be: do we still need carriers at all?