It’s a synthesis of everything I love: a makerbot made of LEGO, printing… more things made of LEGO.

The recursiveness is great. But so is the premise. Is that potentially the tipping point for the Maker Revolution? When 3D printers can create copies of themselves? Think about how much easier it would be to get started: a whole community just has to pitch in for one machine. It’ll either revolutionize the already-revolutionary concept, or bring about the singularity. Either way, though.

My dissertation is done and complete. “Aden in the Balance: Airpower and Counterinsurgency in Aden, 1956-1967” has been handed in, and until I hear or decide otherwise, I am officially finished with school. I’ve got excerpts from that and a lot more goodies from the archive to share with you, but it will have to wait a couple days before I have internet up and running again.

It’s fitting that on the same day my dissertation was due, I am moving to Chicago. I bid a fond farewell to the East Coast, where my heart will always live. And if I ever come back saying “pop” instead of “soda,” please punch me in the face.

I know exactly how these rodents feel; packing has been just like this.

This article reads like a serious version of the above cartoon PSA: “Standards are rapidly changing, and within a few years the human race will be in a position in which sexual immorality could exist on a widespread scale.”

It all depends how you define immorality, but I’d like to believe we’re there already. The future is now!

Aside from the usual terrible, terrible commentary both at YouTube and the site I found this at, it’s an excellent ad (at least for the first 40 seconds). It doesn’t matter if you’re from the East Coast, the Rust Belt, the Bible Belt, the New West, the “Left Coast,” or whatever. It’s America. And it restores a little bit of your faith in it.

We used to make things. And now we do once more? Well, we should be.

Isao Hashimoto has produced this magnificent video of all 2,053 nuclear explosions – almost all tests – conducted between 1945 and 2003 (that’s everything ever except the two North Korean tests in 2006 and 2009). Each second is equivalent to a month – look at the 50s and 60s. How is it that the nightmare scenarios resulting from the use of nuclear weapons never came to pass?

One thing’s for sure: it was a Michael Bay kind of century we just had.

Via The Map Room.

This is the last post I’ll write on the subject (probably), but it makes for a good distraction from studying. The exam’s tomorrow. This is how I roll.

Anyways, I got a lovely thank-you email from one of the Libyan protesters at the LSE last week. In addition to my writing, they made sure to credit my good friend the Hybrid Diplomat for his coverage of the event. The email also included links to a number of photo galleries that ‘their’ photographer had taken. Here is the Gaddafi contingent, glowering at the protesters and trading insults:

Saif al-Islam Gaddafi's coterie of bodyguards and thugs at the London School of Economics, May 26, 2010.

Compare that with the size of the protest: 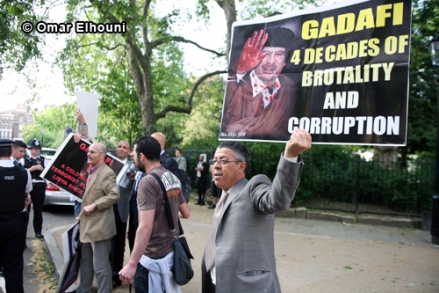 Libyan men protest the Gaddafi regime at the London School of Economics, May 26, 2010.

More pictures are available in galleries here and here, though since receiving the email it looks like someone flagged the sites as “attack sites” (I would assume someone tied to the Gaddafi regime). They’re perfectly harmless. Also available as a special treat is a video of yours truly sitting with Fathallah, the victim of a Libyan beating:

Please distract me in any way possible; it’s only 16 hours until the exam.

A friend of mine got mugged over the weekend coming back from a bar on Saturday night. Luckily, only his phone was taken and he wasn’t hurt at all.

Naturally, CCTV was useless in helping to prevent the crime or even to identify the assailant after the fact. Two separate cameras caught it, not that that matters. Also, rendering the cameras even more useless, they were owned and operated by the LSE, though they were kind enough to release it to my friend.

From him, it got to me. I took the liberty of editing the footage into a single video, and added a very necessary soundtrack. The whole thing only took me about 30 minutes. At least some good came out of the whole affair…

EDIT: Most of the details regarding the path that footage took to get to me were dead wrong. They have since been corrected.

Regardless of what the true story is with the Israeli interception of a Gaza-bound flotilla, all sides and interested parties will take away from it what they want to. Much like the al-Durrah incident in 2000, the flotilla intercept will be used a prism through which any side can view the conflict as a whole.

For instance, the earliest reports that were unable to describe anything more detailed than Israelis boarding the flotilla and killing ten implied a massacre for which Jerusalem was directly responsible. But already video has come out with the true nature of the “peace activists” revealed (via Information Dissemination):

Of course, this in no exonerates Israel of responsibility for the raid in the first pace. If nothing else, this was a public relations catastrophe that could easily spark a third intifada. And it’s hard to see how the result couldn’t be predicted on either side. Galrahn calls it a given:

It is hard for Americans to draw any analogies, because we don’t have a relationship like the one between Israel and Palestine.

But if 1000 people from Mexico, whom our government presumed was mostly made up of drug cartel supporters, tried to sail into San Diego with the expectation of running the blockade of the Coast Guard and creating a political demonstration through confrontation – I assure you the odds of people getting killed would be pretty high.

Either the flotilla itself was an intentional provocation – or not. It really does push the limits of the imagination to assert that no one had any idea a flotilla like that would possibly provoke Israel. But as Abu Muqawama explains, it’s Israel that should have had an even clearer idea of the possible consequences:

But for the sake of argument, and putting ourselves in the shoes of an Israeli naval commander, let’s assume the most malevolent of motivations for the people participating in the peace flotilla. If I am in charge of doing that for the Israeli Navy, I am going to assume these people are smart and are deliberately trying to provoke a crazy response from my sailors and soldiers that will produce ready-for-television images that both isolate Israel within the international community and further raise the ire of the Arabic-speaking and Islamic worlds. I mean, that is my base assumption for what this group is trying to do. So naturally, the last thing I would want my forces to do would be to overreact, right? [emphasis in original]

One need not assign blame to anyone in order to see this as the colossal fuckup that it is. As usual, absolutely no one wins this game.

Like Air Force One over Mount Rushmore, it’s hard to find anything more American than Johnny Cash reading the Gettysburg Address.

It’s days like this where I’m embarrassed by my lack of eloquence. I don’t know quite how to express my gratitude and profound respect for those who have served and continue to serve the United States in uniform. It’s a step I don’t know if I’ll take; a commitment that right now I can’t promise to anyone. But that’s what makes you in the military all so much more impressive. It’s thanks to you I have history to study, a country to be proud of, any ideas of my own to write about.

You have made the world, and you continue to shape it.

You have the discipline and the courage to sacrifice for us. To go a step beyond. To show your own kind of restraint. To give us something to admire, to look up to, to inspire us. And I don’t.

Last week, Russian defense firm Concern Morinformsystem-Agat announced it had designed a clever new launch system for cruise missiles: the Club-K. Designed in the form of a standard shipping container, the missiles can then be launched from essentially anywhere: on a train, from a ship, from a tractor-trailer in the middle of nowhere. They use satellite guidance systems. And in case this seemed like yet another cute idea the Russians had, the system makes use of the 3M-54TE, 3M-54TE1, and the 3M-14TE missiles – all of which are tested and proven. The missiles come in two flavors: anti-ship and anti-ground.

This is naturally troubling on a number of levels, though actually not quite so many as one might imagine at first glance. The most immediate concern is that this particular style of camouflage allows a merchant ship to carry enough firepower to knock out an aircraft carrier – a continuation of asymmetric warfare at sea that Robert Gates has been acknowledging quite a bit recently. Asymmetric threats in general stand to gain the most from this weapon; the sheer banality that the missiles are hidden behind (the container looks so normal) is a clever disguise. Watching that video definitely provokes one of those “why didn’t I think of that?” moments.

Iran and Venezuela are already lining up to purchase the Club-K, and others will soon follow suit. Of course, Venezuela is a highly overrated security problem, but the threat posed by the Club-K is not existential; but one of harassment and annoyance. Iran, on the other hand, poses a clearer danger both itself and through intermediaries. And as Al Sahwa points out:

While it is true that al Qaeda won’t buy this weapon system from CM-AGAT out right, I think we have to recognize that nations like Iran have no qualms in providing groups like Hamas and Hezbollah weapons. The primary limiting factor for a terror organization utilizing this system is most likely the satellite navigation system. A non-Nation State organization would probably need access to a Nation State’s satellite infrastructure, although this is strictly a personal assumption.

However, seeing as some of the weakest links in American border security are the ports, we’re at huge risk there. Is it just me or does the Club-K look like it could also be a toy for eccentric billionaires?