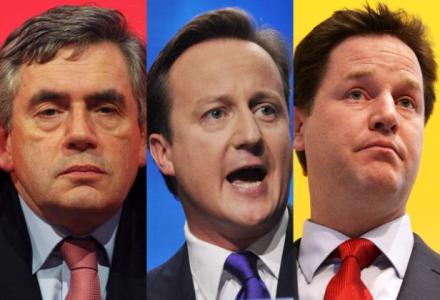 There’s an interesting debate going on over at Harry’s Place as to which British political party has been and would be most conducive (or accommodationist, if you like) to the ‘Special Relationship’. “Norflondon’s” article, in particular, claims that Labour is the “true Atlanticist party.” I would have to disagree.

If you take the three major personal relationships throughout the twentieth century, you have FDR and Churchill, Jack and Mac, and Reagan-Thatcher. All three Prime Ministers were Tories and two of three Presidents Democrats.

This is not meant to imply that the most fruitful partnership would necessarily be Obama-Cameron (i.e. a Democrat and a Tory), but rather that Labour has until recently never been a particularly stalwart half of the Special Relationship. Indeed, America was rather fearful when Clement Attlee and Labour came into power – they were seen as ‘red’ socialists, and socialism was naturally a bad thing (a contemporary cartoon by David Horn in the Evening Standard showed Attlee surrounded by a circle of U.S. Congressmen all asking themselves “no hooves? No tail”)?

The article mentions the Major Government and divides over the Balkans , but considering that was a highly contentious debate within the Clinton Administration itself – not to mention a low-risk bombing campaign – the absence of British support wasn’t seen as a low blow in the same way that say, the Wilson Government’s silence was in Vietnam. Then, of course, there’s Major’s wholehearted British contribution to the first Gulf War.

The change could be pinned on Blair and New Labour, but also keep in mind the nature Blair-Clinton relationship: new center-left incarnations of their old selves.

However, when it comes down to it, does the United States really want a Blairite United Kingdom as part of the special relationship? Patrick Porter has made this point much more eloquently than me; he reminds us of Britain’s pretensions to Great Power status, but then points out the absurdity of Britain trying to do so much:

Geography comes up in the Strategy, but only in a perfunctory and generalised way. It asserts that Africa matters wherever there is extremism or violence, not a very discriminating test; Eastern Europe matters because Britain is engaged there; the Middle East matters because it is central to security and ‘totemic’ to extremists, and Afghanistan-Pakistan for its links to domestic terrorism. Central Asia, Eastern Europe, large chunks of Africa and the Middle East: these four spheres would strain a superpower, let alone Britain.

If at least a portion of an alliance is for figuring out what’s best for an individual country, isn’t the New Labour approach of ‘America first, British national interest second’ pretty bankrupt at this point? Prime Ministers in the past have easily subordinated their Atlanticism to the national interest of the United Kingdom – Thatcher being a notable example – but the times the call for spartan budgets and austerity measures, and those will have to translate into defense cuts as well.

Sadly, I don’t know which prime minister would be the most healthy combination for the Special Relationship and the United States. Perhaps Britain itself must reduce it to no more than a ‘special partnership.’

One thought on “Whither the Special Relationship?”