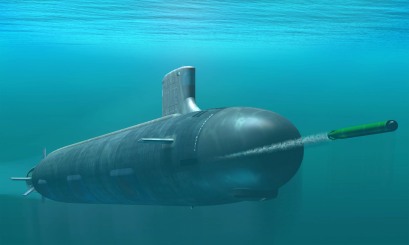 An artist's rendering of the Virginia-class submarine.

Lance M. Bacon had an article out in the May issue of Armed Forces Journal warning us (surprise) about deep cuts to the submarine service that have “cripple[d] America’s sea superiority.” I tend to be skeptical of these Dr. Doom-style pronouncements, namely because a different one seems to appear in AFJ every month, and at least one must be wrong.

But with Bacon, I’m actually more likely to agree. More than anything, naval warfare of the future is likely to be fought beneath the waves, rather than atop them. And yet the submarine service’s downsizing flies in the face of what’s proving to be a relatively cheap form of sea denial and even an offensive weapon. Mike Burleson notes:

The small submarine is not just for weaker powers … It can also equip traditional navies to take the offensive against an enemy when its battlefleet is indisposed, such as after a surprise strike from missiles. The use of anti-access weapons in a future peer conflict might induce the US to use its submarine force, the only real stealth vessels it possesses, to lead a counterattack if its surface navy was somehow disabled early in a conflict. Not an unlikely scenario as we recall from Pearl Harbor, and afterward.

In addition to whatever budgetary limitations are imposed, there’s also the problem of simply manning what subs we do keep. Ever since the Navy started providing laser vision correction, there’s been a dearth of bespectacled sailors, who once upon a time would have had their dreams of naval aviation dashed and instead been consigned to subsurface naval warfare.

In one regard, this is not a terrible problem to have. The pool of potential pilots is now larger then ever, and thus more selective – those who eventually qualify will be the best aviators the Navy has ever seen. But it is reducing the quantity of sailors who would have voluntarily or otherwise served beneath the waves. With the Navy’s recent decision to ban smoking on all submarines, I would assume the number of volunteers would grow even smaller.

Of course, let’s not present the future of the Navy as a binary choice between more aviation or more submarines – as Chris Rawley points out, surface warships aren’t about to disappear anytime soon. But it would be wise not to lose sight of the significant benefits and capabilities that submarines provide for a reasonable price.

One thought on “Dive, Dive, Dive”