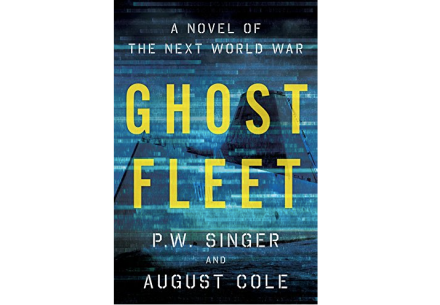 I was a bit late in getting to it, but I was pleasantly surprised by P.W. Singer and August Cole’s Ghost Fleet. It took a bit of effort to get into it, but the temporal leap the novel takes into years after a second Pearl Harbor attack allows for some very interesting worldbuilding. The United States has been taken down a peg and enjoys little to none of its previous dominance. What does the post-hegemonic era look like for America? How, in the fabled era of “degraded ISR,” can American armed forces operate and conduct operations? While we’re living through that transition now, Singer and Cole explore what that future might actually resemble.

Riddled throughout with trenchant criticisms of the current political-military-industrial complex (such as a “Big Two” defense contractors, numerous references to the failings of the F-35, and the Air Force’s institutional resistance to unmanned air-to-air platforms), the vision fleshed out in Ghost Fleet is not a flattering one to our current state of affairs. At times the references are a bit on the nose, but the degree of underlying wit makes up for it.

If nothing else, the opening sequence helps explain even to the layman the importance of sensor platforms and space-based assets, the US military’s dependence on them, and their exquisite vulnerability. Finite quantities of ship-launched missiles and other material become apparent in a way that can be challenging to discern in real-life operations. Our reliance on Chinese-produced microchips and other advanced technology becomes a easily-exploitable Achilles’ Heel, in a manner all too reminiscent of the Battlestar Galactica pilot miniseries.

A new techno-thriller is, of course, cause for comparison to Tom Clancy, and where this far outshines him is in its willingness to critique technology and current trends in military procurement rather than lauding it unreservedly, while crafting somewhat multi-dimensional characters (some of whom are even not white!). And as I’ve written before, even if wrong in the details, fiction like this helps broaden the aperture a bit and convey the potentialities of future conflict. If not China, then Russia; if not the F-35, then perhaps the long-range strike bomber: things will go wrong, technologies will fail, and the United States may well be caught unawares. Hopefully, with novels such as Ghost Fleet illustrating the cost of unpreparedness, it will be possible to forestall the future it envisions.