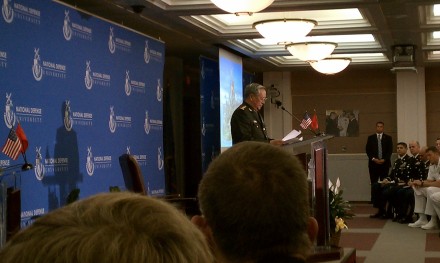 The most difficult part about watching an official speech – be it on policy or otherwise – is to separate the platitudes from the substance, assuming there is any of the latter. The meat of public remarks can often be found in soundbite form, or on a single slide of a powerpoint presentation. It is also equally possible to sit through an entire thirty minute speech and to hear absolutely nothing that hasn’t been said before.

Fortunately, that was not the case when Chen Bingde spoke at the National Defense University last week. While granted, much of the talk consisted of appeals to American sensibilities and national interests, there were some moments of real substance in it.

General Chen opened by declaring this to be an “official goodwill visit,” and that the Chinese sought mutual respect and benefits for both parties in Sino-American relations. He reminded us that the Chinese name for the United States translated to ‘beautiful country’. END_OF_DOCUMENT_TOKEN_TO_BE_REPLACED

Last week I had the pleasure of attending another Chicago Council on Foreign Affairs event specifically for Young Professionals. In this case it was a conversation between all-around-urban-intellectual Greg Lindsay and architect Jeanne Gang on nothing less critical than “The Future of Cities.”

Lindsay just cowrote the book Aerotropolis: How We’ll Live Next with John Karsada, which at its most basic is about the coming airport-centric design and planning that will determine the future of cities and the course of twenty-first century urbanism. But even that mouthful of a description doesn’t really do the book justice. Reading Geoff Manaugh’s interview of Lindsay (and also, Lindsay’s of Manaugh), puts the book in a new light and raises a whole variety of additional interpretations to Aerotropolis‘ main theories.

The talk, however, did not focus solely on Lindsay’s book. After a rather stilted introduction from a local Boeing representative, Lindsay launched into a brief overview of the cities of the future. In the next twenty years more “urban fabric” will be created than in the entire rest of human history. And none of them will look like Chicago. They will be born into nowhere, separated from their surrounding regions. END_OF_DOCUMENT_TOKEN_TO_BE_REPLACED

A classic example of realist IR theory at work.

In the late summer of 2009, Dan Drezner came out with a delightful piece in Foreign Policy called “How International Relations Theory Would Cope with a Zombie Uprising.” It’s really quite clever, exploring the effects of a zombie apocalypse as seen through the eyes of  a structural realist, a liberal institutionalist, a social constructivist, and so forth.

Apparently, Drezner was so pleased with the idea that he ran with it and turned it into a book: Theories of International Politics and Zombies. And for the launch of the book, he’s doing some sort of speaking tour. I had the pleasure of seeing him talk last night, courtesy of the Chicago Council on Global Affairs. There’s no way I could have passed it up – it combines two of my great pleasures in life. International relations theory and the walking dead.

Having an open bar was an excellent call for an event like this. There’s only so much gravitas you can hold while discussing the finer points of the constructivist critique; namely, that zombies “are what we make of them.” No single paradigm can accurately model zombie behavior, of course. Realism assumes that somewhere down the line zombie states will emerge. Liberalism sees the possibility of cooperation with the zombies. Constructivism thinks that the zombies can be socialized. None of these will hold true; the closest real-world comparison for the tactics and effects of massed zombies would include assymmetrical warfare, global transnational terrorism, and the spread of communicable disease.

Drezner was great, peppering his talk with clips from Night of the Living Dead, both the original Dawn of the Dead and the remake, Shaun of the Dead, and Michael Jackson’s “Thriller” video. Also getting heavy mention was Max Brooks’ World War Z, which I was especially glad to hear as it meant I could ask a question about the Battle of Yonkers being a failure of RMA without having to explain the former. (Answer: not a failure of RMA, but a reflection of the bureaucratic morass at the Pentagon – the intransigence of Standard Operating Procedure.) Here are Drezner’s general conclusions:

And now, some highlights from the Q&A. Drezner’s zombie contingency plan:

If you don’t hear from me for a week, pack up and move to New Zealand.

The zombies’ effect on existing conflicts:

If zombies broke out in Belgium, you know the Flemish would throw the Walloons under the bus.

We would see a large exodus/mass migration from urban centers to far more rural areas:

Richard Florida would be devastated. And eaten.

A protracted counter-zombie campaign would most likely lead to a ‘counter-zombie policy fatigue’. We might, perhaps, come to take the same view of such a strategy as we eventually did of Prohibition. Drezner also suggested his next book, in keeping with Keohane’s After Hegemony, might simply be titled After Aliens.

Anyways, it was a great event, and many thanks to the Chicago Council for putting it on. Especially as a Young Professionals event. I picked up a copy of his book there (and had him sign it. “To Graham: hope you survive!”); expect a review soon.

For anyone currently in London (and by currently, I mean in early May), Cory Doctorow is giving a free talk at Nettlefold Hall in West Norwood on May 8. RSVPs are required, though – send an email to readersandwriters@lambeth.gov.uk.

Along similar Doctorovian lines, I read a post in The Art of Manliness, of all places, bemoaning the “modern immaturity” of men, and encouraging us to “create more, consume less.” Consumerism is, after all, a passive activity that reduces all willpower to an illusory choice – “the weakening of man’s free agency.” It’s an indictment both of consumerism and of any kind of forward thinking:

The problem with consumerism is that it heavily emphasizes choice, to the complete exclusion of the idea of living with that choice. Choose, choose, choose. But what happens after your make that choice?

Definitely worth reading and considering in all contexts – be it manliness, resilience, or otherwise.