Further proving the point of my last post, the protests in Hong Kong are now seeing some…interesting visitors, as reported by @HongKongHermit:

As one might expect, this generated a dozen competing narratives as to why Azov would show up in the first place: was it anti-communist solidarity? Proof that the protesters really are “Western fascists?” Some kind of “false flag” operation? Beijing’s supporters were quick to seize upon their presence to discredit the protests in general. See, for instance, the explanation as offered by Sputnik:

It’s unclear why the groups, sporting the apparel of a far-right hooligan group called “Honor” or “Gonor,” have gone to Hong Kong, but the fact that both the 2014 Ukrainian coup and the present protests in Hong Kong have enjoyed extensive support from the CIA-spawned National Endowment for Democracy may give a clue.

Few protest organization seem to have taken the bait, but demonstrations like the one full of Trump and MAGA gear are sure to attract the worst possible people attempting to prove their own bona fides. (The phenomenon extends to US politicians, too.) 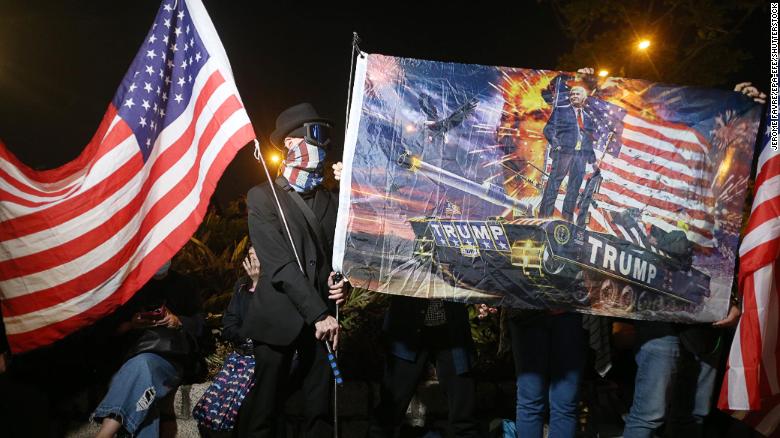 The most pressing question, to me, though, is how Azov was able to enter Hong Kong in the first place, given previous denials of entry in Denmark and Czechia, at least. That’s the only part of this that seems as if it might have carried the tacit blessing of the CCP, and if I were trying to quietly discredit the protests, doing so through damned associations, allowing neo-Nazis and foreigners in to show their support, would be an easy way to do so.

But on th eother hand, it could just be relatively lax border controls and the attraction of right-wing moths to a flame.

The other night, while watching Deutschland ’83, I found myself wondering what a 1990s-era Soviet Union – and Eastern Bloc, in general – might have looked like. What a world of possibility! To what extent would the same commercial energies in the west have been poured into monetizing the internet? What would growing digital interconnectivity in the world have looked like with half of it still cut off (and would that still have been the case)?
A Cold War contnuing into the 90s has ominous portents – in what new and exciting ways would have been coupling ever-advanced nuclear warheads (say, the never-built B90) with precision-enabling technologies? What shape would US infrastructure and the built environment have been in without the “Peace Dividend?” Would Martin Marietta still be around? Would a liberalized Soviet Union have helped drag the welfare state into the twenty-first century? Could it possibly have persisted as a nation, or were there insurmountable internal contradictions?

But no, Gorbachev’s program of reform led to loosening Moscow’s control over the periphery led to velvet revolutions and Solidarność and the attempted coup and the dissolution of the Soviet Union. Contemplating this sequence of events and all the other possibilities it forestalled leaves one with the same feeling of unease that follows a car crash or being on the receiving end of a chewing-out. Which isn’t to lament those lost presents, but one is left with the recognition that everything, in the end, is up to chance. Who predicted the end of the Soviet Union? Who saw these momentous events coming? And if all other alternative action was an attempt to preserve some version of the status quo, it engenders a kind of paralysis; change is coming so why do anything at all?
You could look at Hong Kong as well, and how its return to China was predicated on the fact that while Hong Kong Island and the Kowloon Peninsula were ceded to the United Kingdom in perpetuity, the “New Territories” from southern Guangdong were only under a 99-year lease (99 years being thought “as good as forever” by the lead British negotiator), the 1898 Convention for the Extension of Hong Kong Territory. That measure of the eternal expired in 1997 – hence the handover that year – after the Thatcher Government determined in the 1980s that continued British sovereignty over Hong Kong unviable without the New Territories. For want of an temporal imagination, the pearl was lost.
The number of branching possibilities, of an unending sequence of slightly different parallel universes is enough to drive anyone insane. And seizing on that one lost opportunity, that minor oversight that’s led to a present crisis… I’d never discourage the study of history – or alternate history –  but dwelling on some of those wanted nails can raise impossible questions. Contemplating the infinite can take us to the edge of madness.
But accompanying this is a reason for optimism: if anything at all is possible, that includes good outcomes, so prudence calls for us to prepare to make the most of opportunities. TO seize the moment. What’s possible right now might not be so tomorrow, but that doesn’t mean a different future isn’t worh imaging. But beyond a broad vision of possibility, it’s critical to imagine the details, the causality. How do we get from here to there? Everything is unsettled; no longer does the arc of history follow some predictable trajectory – for better or worse, our destiny is ours to affect, if not define.
What might have been? What could be?