This is old news, but worth pointing out anyways. Back in April, the Benelux countries (Belgium, the Netherlands, and Luxembourg) signed a tripartite defense agreement that, among other things, will allow for greater interoperability and joint training between the Belgian and Dutch navies and various paratroop/air mobility units of the two. Luxembourg is, well, involved somehow.

So for those of you keeping score, that makes at least three fairly comprehensive subregional defense compacts within the EU: the Benelux compact, the Anglo-French Entente, and the Visegrad group. The Baltics also have some jointness going on, including a collective military unit. Here’s a little map of the regional groupings: 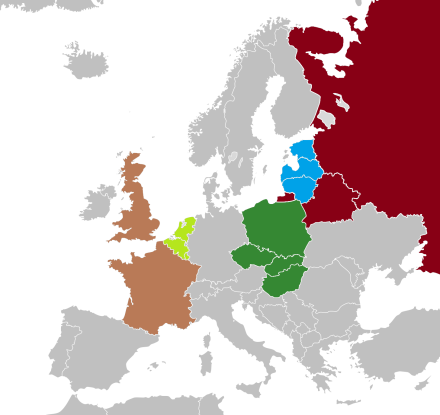 But, uh…who’s Germany partnering with? And I’m assuming I’ve missed some other subregional partnerships/alliances – what’s Scandinavia doing? And whether this is a supplement to EU/NATO membership or something more, well, if it weren’t already clear how politically fragmented Europe is, this just reinforces that.

Via War is Boring:

In September 2008 two Dutch army squad leaders and their soldiers refused to go out on what Radio Netherlands describes as “a risky reconnaissance patrol” in Uruzgan, Afghanistan. The platoon leader responsible for the mission was allegedly guilty of  “excessively authoritarian behavior.” “[H]e was prepared to accept fatalities on the patrol,” Radio Netherlands reports.

On the surface, this is clearly ridiculous. Deeper down, it actually stays pretty ridiculous, but nevertheless there’s an argument to be made here. I’m not going to make it, but without conscription (as is the case in Holland), the point is moot.

I know, I know – I sound precisely like a member of the “101st Chairborne.” Then again, I haven’t joined the armed forces. My point is that if you sign up for a military willingly – and I emphasize willingly – you should be equally prepared to accept the risks inherent to combat. There’s a different between a ‘risky’ mission and one that’s ‘suicidal’, and according to the reports I’ve seen, this is a clear case of the former. It’s a warzone. There are enemies out there. And that’s why you’re there.

The worst part is the assumption of universality. The squad leaders “are worried for other soldiers who may have to serve with him in the future.” One can only hope that other soldiers take themselves more seriously. And professionally. I’m trying really hard to refrain from using this to condemn the European fighting spirit in toto, but it’s certainly one more nail in the coffin of a confident, vigorous West.