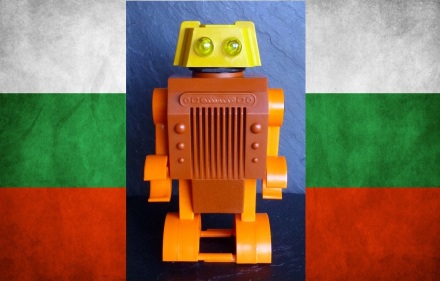 Isaac Asimov’s three laws of robotics are fairly well-known at this point. But, as Victor Petrov explains in his delightful overview of the Bulgarian Cold War-era technology industry and accompanying science fiction movement, they were far from the final three. Lyuben Dilov, a “towering” figure in Bulgarian sci-fi, wrote The Road of Icarus about an asteroid-derived generation ship, and the ethical quandaries of creating an artificial intelligence in such circumstances: “what is it to be a man when there are so many machines? Thus, Dilov invents a Fourth Law of Robotics, to supplement Asimov’s famous three, which states that ‘the robot must, in all circumstances, legitimate itself as a robot’.”

Others piled on. Nikola Kesarovski, whose short story collection was actually titled The Fifth Law of Robotics, coined the titular law in his story of the same name: “a robot must know it is a robot.” One wonders whether Ronald B. Moore and the other creators behind the Battlestar Galactica reboot were familiar with Kesarovski. Finally, Lyubomir Nikolov rounds out the canon:

In his story ‘The Hundred and First Law of Robotics’ (1989), a writer is found dead while working on his eponymous story, which states that a robot should never fall from a roof. He himself is killed by a robot who just didn’t want to learn any more laws, resulting in the final one: ‘Anyone who tries to teach a simple-minded robot a new law, must immediately be punished by being beaten on the head with the complete works of Asimov (200 volumes)’.

Hopefully, by the time we get to Law 101, we’ll have figured out how to have rendered the techno-nightmares of AI run amok nothing but – dreams.

And all of this is happening against the equally dreamlike, near-fantastical backdrop of Bulgarian modernization and informatization, as Petrov writes:

The Balkan state was, by the 1980s, the Eastern Bloc’s ‘Silicon Valley’, home to cutting-edge factories producing processors, hard discs, floppy drives and industrial robots. It was called ‘the Japan of the Balkans’, producing nearly half of all computing devices and peripherals in the Eastern Bloc…

The Bulgarians surged ahead of their socialist allies through close contacts with Japanese firms and a massive industrial espionage effort. While Bulgarian engineers signed contracts with Fujitsu, state security agents criss-crossed the United States and Europe in search of the latest embargoed electronics to buy, copy or steal. In 1977, a whole IBM factory for magnetic discs based in Portugal was bought by a cover firm and shipped off to Bulgaria; elsewhere, secrets were passed on to Bulgarians by their foreign colleagues through the simple exchange of catalogues and information at conferences and fairs. Scientists back in Bulgaria reverse-engineered, improved, tinkered; soon towns that once processed tobacco were supplying hundreds of millions of customers with computers.

Looming over all of this is the parallel Soviet effort at a socialist internet, the data juggernaut just over the horizon, out of sight. Bulgarian science fiction writes itself; phantom AI purchasers spiriting away entire factories, the detritus of post-industrialization; shadowy deals cut between equity firms, brand consultants, and the organs of state ownership; eldritch information inscribed in the pages of Oriental Trading and on AOL CDs…