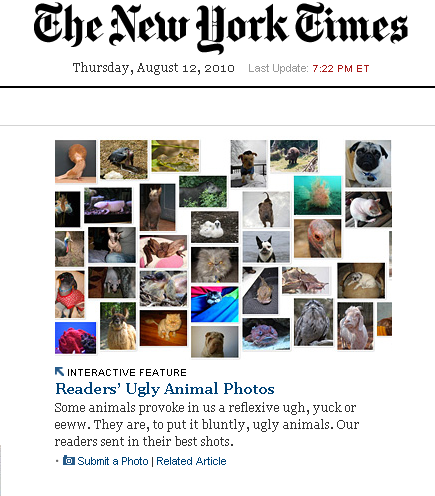 And also, how dare you call pugs ugly.

Peter Beinart wrote a pretty decent appraisal of Ronald Reagan’s more moderate and dovish tendencies for Foreign Affairs recently. For anyone at all to approach the Gipper with a modicum of even-handedness is impressive these days, and for some of those facts to damn near inspire me; well, I guess that just speaks to Reagan’s better qualities.

Anyways, moral of the story is that of all people, Foreign Affairs somehow ended up with Richard Perle writing a rebuttal. Yes, that Richard Perle, the ‘Prince of Darkness’, who argued for invading Iraq with 40,000 troops. The same Perle who got tired of being credited with planning the Iraq War and passed the buck up to President Bush . The same Perle who called Seymour Hersh a terrorist , proposed a national biometric ID card program, and demanded an invasion of Syria (at this point it should of course be noted that Perle attended the London School of Economics for a time). Perle’s latest gem is called “Against Evil,” with a tagline of “Only liberals like Peter Beinart think that Ronald Reagan was a dove.”

Regardless of what the true story is with the Israeli interception of a Gaza-bound flotilla, all sides and interested parties will take away from it what they want to. Much like the al-Durrah incident in 2000, the flotilla intercept will be used a prism through which any side can view the conflict as a whole.

For instance, the earliest reports that were unable to describe anything more detailed than Israelis boarding the flotilla and killing ten implied a massacre for which Jerusalem was directly responsible. But already video has come out with the true nature of the “peace activists” revealed (via Information Dissemination):

Of course, this in no exonerates Israel of responsibility for the raid in the first pace. If nothing else, this was a public relations catastrophe that could easily spark a third intifada. And it’s hard to see how the result couldn’t be predicted on either side. Galrahn calls it a given:

It is hard for Americans to draw any analogies, because we don’t have a relationship like the one between Israel and Palestine.

But if 1000 people from Mexico, whom our government presumed was mostly made up of drug cartel supporters, tried to sail into San Diego with the expectation of running the blockade of the Coast Guard and creating a political demonstration through confrontation – I assure you the odds of people getting killed would be pretty high.

Either the flotilla itself was an intentional provocation – or not. It really does push the limits of the imagination to assert that no one had any idea a flotilla like that would possibly provoke Israel. But as Abu Muqawama explains, it’s Israel that should have had an even clearer idea of the possible consequences:

But for the sake of argument, and putting ourselves in the shoes of an Israeli naval commander, let’s assume the most malevolent of motivations for the people participating in the peace flotilla. If I am in charge of doing that for the Israeli Navy, I am going to assume these people are smart and are deliberately trying to provoke a crazy response from my sailors and soldiers that will produce ready-for-television images that both isolate Israel within the international community and further raise the ire of the Arabic-speaking and Islamic worlds. I mean, that is my base assumption for what this group is trying to do. So naturally, the last thing I would want my forces to do would be to overreact, right? [emphasis in original]

One need not assign blame to anyone in order to see this as the colossal fuckup that it is. As usual, absolutely no one wins this game.

The attack of the other day is starting to get a little bit of play in the press. They all insist on characterizing it as a “brawl,” however. Last I checked, eight versus two is more of a beating.

The Guardian praises Gaddafi as a reformer, and as that paper now routinely does, causes me to throw up a little in my mouth. The Evening Standard is a little more even-handed, but still fails to distinguish between the attackers and the victim. Most accounts, though, like the AP’s, focused entirely on Gaddafi’s non-answer to the question asked him about the Lockerbie bomber. “He is very sick,” was all he replied.

All too often, a newspaper’s article about an aspect of the Chinese military uses an alarming headline, builds up the “threat,” and then contradicts itself within the first few paragraphs. This time, it’s the New York Times in an article titled “China Expands Naval Power to Waters U.S. Dominates.”

YALONG BAY, China — The Chinese military is seeking to project naval power well beyond the Chinese coast, from the oil ports of the Middle East to the shipping lanes of the Pacific, where the United States Navy has long reigned as the dominant force, military officials and analysts say.

Well, OK, so far so good. Nothing there that we didn’t know already.

The strategy is a sharp break from the traditional, narrower doctrine of preparing for war over the self-governing island of Taiwan or defending the Chinese coast. Now, Chinese admirals say they want warships to escort commercial vessels that are crucial to the country’s economy, from as far as the Persian Gulf to the Strait of Malacca, in Southeast Asia, and to help secure Chinese interests in the resource-rich South and East China Seas.

Yeah, that’s also nothing new. The ‘three island chain plan‘ has been around for decades; this was just the logical next step. They’re in the Gulf of Aden already conducting anti-piracy operations.

The overall plan reflects China’s growing sense of self-confidence and increasing willingness to assert its interests abroad. China’s naval ambitions are being felt, too, in recent muscle flexing with the United States: in March, Chinese officials told senior American officials privately that China would brook no foreign interference in its territorial issues in the South China Sea, said a senior American official involved in China policy.

Well, seeing as the South China Sea is a part of the first island chain – an arena China’s been capable of defending and projecting itself into for some time – this doesn’t change anything, really. Much like the United States will brook no interference in its own territorial issues. I’m not even sure what the problem is here that Wong sees…

The naval expansion will not make China a serious rival to American naval hegemony in the near future, and there are few indications that China has aggressive intentions toward the United States or other countries.

Oh, there it is. Thank you, Edward Wong, for leading us on with five paragraphs about the growing menace of the Chinese Navy and abruptly telling us “oh, you know what? Don’t worry about all that stuff I just said. It doesn’t matter.” Sea denial has been the constant refrain of the Chinese for a decade; the fact that we’re just catching on now is the alarming part. That’s why China’s focus is on asymmetrical naval warfare – not carriers to fight our carriers, but land-based missiles to sink our carriers.

END_OF_DOCUMENT_TOKEN_TO_BE_REPLACED

Always use the word ‘war-torn’ in your title. Subtitles may include the words ‘tribal,’ ‘Taliban,’ ‘corrupt,’ and ‘Sharia.’ Also useful are words such as ‘shuras,’ ‘fighters,’ ‘refugees’ and ‘insurgency.’ Do not distinguish between different ethnic groups with different languages, religions and histories, or regions with different landscapes and livelihoods. If people in Kandahar tell you something, assume people in Kabul feel the same way, and vice versa. Whenever possible, mention Pashtunwali. (Note: you do not need to understand what Pashtunwali is. You get points for mentioning it anyway.)

Never have a picture of a well-adjusted Afghan accompanying your article. (Make an exception for Afghans you want to be president.) A stoned cop, a woman in a burka begging, a scowling man holding a Kalashnikov: use these. If you must include an Afghan who is not miserable or threatening, make sure you get an elderly farmer with very few teeth, or a little girl holding a baby goat.

I’m reminded of why I chose ‘monolithic’ as my word of the month (possibly of the year).

Just ahead of Oscar night, word comes that Disney is pulling the ABC channel from Cablevision – affecting about 3 million subscribers in the New York-New Jersey area. ABC is, of course, scheduled to broadcast the Academy Awards tonight.

I’m in no way affected by this, be it living in New York, a Cablevision subscriber, or a religious Oscar aficionado, but this is still pretty outrageous. If you subscribe to cable, you’re now denied access to a theoretically public access channel. ABC may no longer broadcast in analog, but it still does in digital – across frequencies in the public spectrum, which have been leased from the public (and which existing analog broadcasters were able to obtain licenses for without an auction).

Of course, the former obligations that stations using public airwaves were held – such as the “fairness doctrine” – have been allowed to lapse. No one is required to do much of anything anymore, save not broadcasting ‘filth’ and ‘obscenities’. But worse is that millions of people are denied access to a station in the public spectrum over a billion-dollar dispute. I know, I know, theoretically everyone could go out and buy an over-the-air broadcast converter, but how many of those do you think are in stock in the New York metro area?

Nobody at all wins here.

Does anyone still watch news? I find myself more and more turning towards online text. With the possible exception of The Onion, video news is a total waste of time. There are so many ways to obscure your lack of a point with video, the vast majority of which usually ends up as meaningless. On Newswipe, Charlie Brooker explains “how to report the news,” beginning with that lackluster establishing shot (via Disinformation).